Now the controversial Mon Tulfo and Raymart Santiago-Claudine Barretto fight has come to a conclusion as to who really started the commotion. Actually, there’s a video that proves it all, and as to what I’ve expected, it all points to Raymart Santiago’s camp. 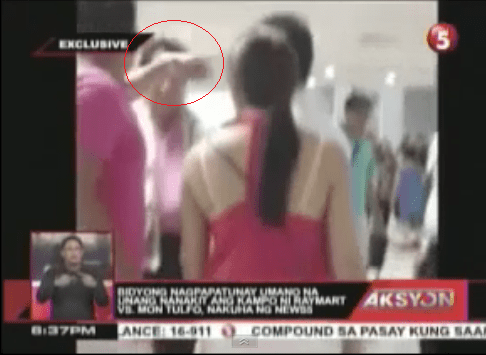 As you can see below, there’s a new video surrendered to News TV5. It shows the pink man, Eduardo Atilano, firstly hit Mon Tulfo. In short, he started the physical fight between Mon Tulfo and Raymart Santiago-Claudine Barretto camp.

So I think this pink man Eduardo Atilano should be praying to his knees now. I know that there will be a time he’ll pay for it to the T3, I know and I believe and I really WANT it to happen. Let’s say 1, 2, 3 GO TULFO Brothers, get him for good for acting so cocky, not knowing his place at all.