I was first astounded what I read on my Twitter as I’ve seen Justin Bieber’s retweet. Bieber retweeted one of Floyd Mayweather Jr tweets. According to the tweet by Mayweather, he is calling out Manny Pacquiao for the fight on May 5. The exact tweet is “Manny Pacquiao I’m calling you out let’s fight May 5th and give the world what they want to see.” posted January 10 at around 7:30 PM(Singapore Time). Here is the screenshot of Mayweather’s tweet which is really meant for Pacquiao. 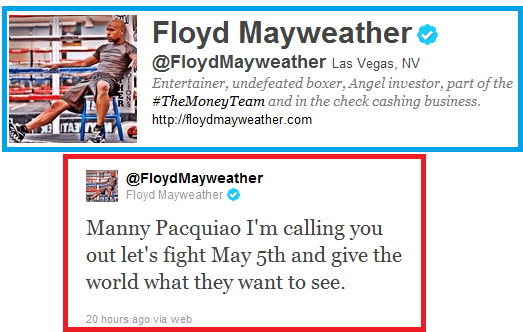 Let’s hope the battle on May 5th will be Pacquiao VS Mayweather, the dream battle the whole world want to see.