I personally congratulate our People’s Champ Manny “Pacman” Pacquiao for winning today’s boxing match against Brandon Rios for the WBO International Welterweight title. It seems Manny Pacquiao was back to his old boxer self. The Filipinos were very happy to see Pacquiao being aggressive again, but in a tactical way. He wouldn’t want to allow a lucky punch lost like what happened with Juan Manuel Marquez recent fight. 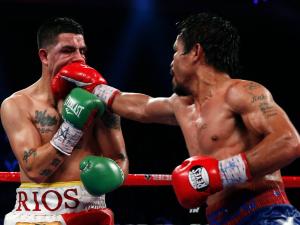 I can say that I was impressed to see him beat the crap out of his young opponent, Rios. He has the disadvantage when it comes to reflexes, but he’s way too fast compared to Rios, which you could say that Pacquiao was the younger one if you didn’t know his age.

Rios was tough, but not good enough for Pacquiao. He even failed to give us a good fight at all. Pacman really deserved to win. That’s a fair and honest decision.

Congratulations Manny Pacquiao! I’m still dreaming of Pacquiao VS Mayweather Jr., and the results will be clear that Mayweather Jr. will have a devastating lost because he’s a chicken.