Now this is yet another fight of our People’s Champ Manny Pacquiao! We have witnessed two fights between these fighters, and they never let the viewers get bored for not putting up a good fight. At first, Manny Pacquiao had a draw with Juan Manuel Marquez. That was a ferocious fight. The people were not satisfied, so it came to a Pacquiao VS Marquez II in which Pacquiao won by split decision. 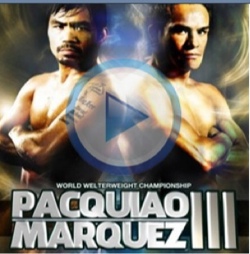 The question which led to Pacquiao VS Marquez 3 is “Can Pacquiao knock out Marquez?” People want to see more of those fights the two great boxers can provide. Thois will be a super intense fight for sure.

So the BIG question, who do you think will FALL? Watch out! Don’t miss any round in this fight.