We have seen the well-known fight video of Mon Tulfo and Raymart Santiago. Yes, it is so famous that over all copy of videos reached over million views. How controversial could it be? 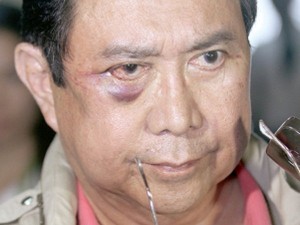 Well, since Hitler even have to react over it, it really was controversial. We can now view the reaction of Hitler towards the fight between Tulfo and Santiago-Barretto. Even the three younger Tulfo brothers were mentioned in the video.

Now for me, I’ll pick the side of the Tulfo. We all know actors can deceive the viewers. With just a little drama, they can manipulate the situation. In this one, I guess there’s no reason for them to beat up an old man, Mon Tulfo.
If only it was one one one man to man combat, Raymart Santiago and even the shit Eduardo Atilano who gave blows only when Tulfo just got disabled. What a gay!

Now, you would be missing this one if you do not watch Hitler Reacts to Tulfo-Santiago Brawl. Have fun!