Yehey! It is yet another season for us Code Geass fanatics. Did you know that Lelouch Lamperouge still lives? That fact makes it possible for Code Geass Season 3 to exist. Bandai have announced a continuation of their popular Code Geass anime, due for release in 2010. 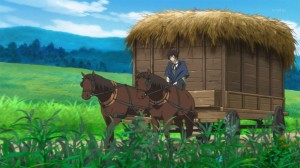 Do I have proofs? Of course! Look at the last episode of Code Geass R2. The one who was driving the cart is Lelouch. He was the one C.C has been talking to.
Still not convinced? Let’s talk about the code. When C.C was killed before, she gained immortality, and hence the code was passed to her. The same thing goes to Lelouch. Lelouch gained immortality as soon as he got killed by Suzaku. That’s how it goes.
We all know that Lelouch won’t sacrifice himself just for that. His way of thinking is extraordinary.

Let’s look forward for this new season of Code Geass, the season 3! The release date is some time in 2010.